Danger Zone Pokie is developed on the Microgaming platform and has a 6 × 4 (reels/rows) format with 25 paylines. Free games, Bursting Major Dynamite Feature, and Bursting Wild Dynamite are also waiting for you. If you’re lucky, the next blast of dynamite will net you 80 times more than one payline. 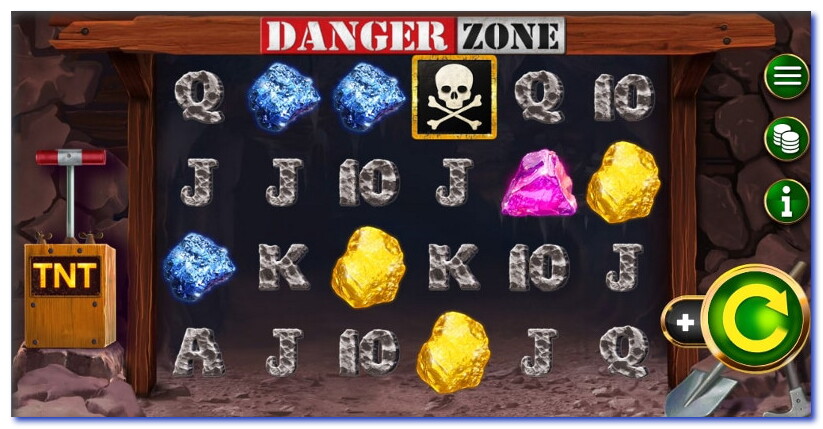 Of course, precious gems can be found deep underground. Danger Zone pokie wins are divided into so-called major and minor wins. There are four main winning symbols represented by gold, purple, green, and blue gems. By comparison, the side win symbols are made up of the typical five Royal Flush poker symbols, which are beautifully carved in stone here. The soundtrack contributes to the slot atmosphere and gives the feeling that you are reliving the American gold rush of the 19th century again.

The Danger Zone pokie has a payout ratio of 95.12% and is played with stakes ranging from $ 0.25 to $ 250. Explosive mining slots are plentiful now, and if you like the genre, we have two alternative slots. For example, there is Dynamite Riches from Red Tiger Gaming with 5,341x the top prize. Our second recommendation is Big Time Gaming’s Bonanza slot, which offers up to 117,649 ways to win and a max win of 250,000 coins.

Speaking of the wild symbol, it replaces all other symbols except the scatter symbol and helps you form worthwhile winning combinations. If you’re lucky, you’ll be rewarded four, six, or even 80 times your stake if three, five, or even six wilds land on a payline. The skull symbol represents the scatter symbol. If three scatter symbols appear on the reels, the free game mode starts with eight free spins.

The Danger Zone pokie is optimized for iOS or Android mobile devices and desktop platforms (Windows). The explosive pokie machine offers the best entertainment on the go.

Wild Symbol: Wild symbols substitute for all symbols other than the scatter symbol and help form the most extensive possible payline.

Scatter Symbol: The scatter symbol represents the skull and crossbones.